Cytokine Signaling: The More Things Change, the More They Stay the Same 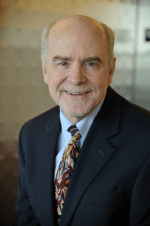 National Institute of Arthritis and Musculoskeletal and Skin Diseases, NIH

O’Shea is best known for his work on cytokines, which are small proteins important in cell signaling. A substantial portion of cytokines bind to receptors that associate with a class of protein tyrosine kinases, termed Janus kinases or Jaks. O’Shea and his colleagues cloned the tyrosine kinase Jak3 and demonstrated its role in pathogenesis of severe combined immunodeficiency, including rheumatoid arthritis. This, in turn, has led to the development of a new class of immunomodulatory drugs. O’Shea joined the NIH as a fellow in NIAID in 1981 and started his own lab group in NCI in 1989 before moving to NIAMS in 1994 as chief of the Lymphocyte Cell Biology Section. He then became chief of the NIAMS Molecular Immunology and Inflammation Branch in 2002. He worked with Bill Paul as a fellow and as a collaborator for many years. A member of the National Academy of Medicine, O’Shea is the recipient of numerous awards, including the 2021 Harrington Prize for Innovation in Medicine (with fellow NIHer Warren Leonard, NHLBI), the U.S. Public Health Service Physician Researcher of the Year, Lee C. Howley Sr. Prize for Arthritis Scientific Research, the Ross Prize in Molecular Medicine, the Cytokine Society Milstein Award, and the AAI-Steinman Award for Human Immunology Research.

Investigation of the basic mechanisms by which cytokines and interferons exert their effect led to the discovery of a new paradigm in cell signaling, namely the JAK-STAT pathway. These discoveries revealed a remarkably direct mode of regulating gene expressing but also provided insights into mechanisms of human disease and impetus to generate a new class of therapeutic agents. With new tools, it has also become clearer that cytokines and interferons have a profound epigenomic impact, and they themselves have complex genomic organization. That is, cytokines and cytokine receptors loci are often manifested by superenhancer architecture and reside in proximity to long noncoding RNAs. Identifying such regulatory regions provides clues to unexpected importance and regulation of function of genes in immune and other cells.